Vic Smith is CEO of JV Smith Companies, a diverse group of operations with farming, cooling and distribution facilities and shipping capacities in Arizona, California, Colorado, and Baja, Mexico. Skyview Cooling was the companies’ first operation, formed in 1970 as a cooling company in Colorado and New Mexico. By 1977, it had expanded to Yuma, and then in 1982 it began operations in northern Mexico. Today, JV Smith Companies farm several commodities including romaine, iceberg lettuce, spinach, celery, mixed leaf and organic spring mix, carrots, and green onions.

Mr. Smith studied Economics and Business Law at the University of Colorado from 1970-1974. He went on to study Finance at Arizona State University in 1975. Since 1991, he has overseen all the companies’ farming, packing and cooling operations, including over 32,000 acres of vegetable production annually. Mr. Smith is currently on the Board of Directors of Center for Produce Safety, Equitable Food Initiative, Brighter Bites, and ifoodDecisionSciences, Inc. He is also a member and previously served on the Boards of United Fresh Produce Association, Produce Marketing Association, and Western Growers. 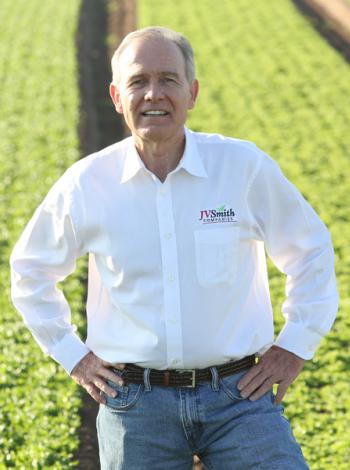